Those of you who are proud to be Libras, well, you may no longer be Libras.  You could be Virgos.  At least, according to astronomer Parke Kunkle. 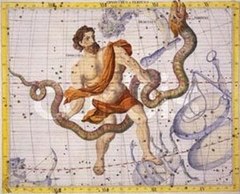 Due to the current changes in Earth's alignment, the dates of the zodiac have changed, thanks to the inclusion of a long forgotten 13th zodiac sign— Ophiuchus.

For those of you who know nothing of the zodiac, here's the definition from the New Oxford American Dictionary:

zodiac |'zode?ak|
noun Astrology
a belt of the heavens within about 8° either side of the ecliptic, including all apparent positions of the sun, moon, and most familiar planets. It is divided into twelve equal divisions or signs (Aries, Taurus, Gemini, Cancer, Leo, Virgo, Libra, Scorpio, Sagittarius, Capricorn, Aquarius, Pisces).
• a representation of the signs of the zodiac or of a similar astrological system.

But what about Ophiuchus?

Kunkle and other like-minded astronomers say that the Earth and Sun slowly move over time, which means the signs gradually change.

The change didn't happen over night either.  The 12 signs were designated to different periods of the year almost 3,000 years ago, when astrology began, and since then the Earth's position in relation to the sun has changed.  [via Huffington Post]

The New Oxford American Dictionary now even includes an addendum to their definition of zodiac:

The supposed significance of the movements of the sun, moon, and planets within the zodiacal band forms the basis of astrology. However, the modern constellations do not represent equal divisions of the zodiac, and the ecliptic now passes through a thirteenth (Ophiuchus). Also, owing to precession, the signs of the zodiac now roughly correspond to the constellations that bear the names of the preceding signs.

But don't fret.  According to NBC, it shouldn't affect anyone's horoscope readings.

Check below to see what your new astrological sign is.

Or for video guide references, check out the Astrology section on WonderHowTo.  If you're more into astronomy than astrology, then check out our Astronomy science videos.

Want to master Microsoft Excel and take your work-from-home job prospects to the next level? Jump-start your career with our Premium A-to-Z Microsoft Excel Training Bundle from the new Gadget Hacks Shop and get lifetime access to more than 40 hours of Basic to Advanced instruction on functions, formula, tools, and more.

Other worthwhile deals to check out:

Join the Next Reality AR Community

Get the latest in AR — delivered straight to your inbox.

I don't accept the new calendar and am staying a libra. End of story.

I know. I'm not much for astrology and horoscopes, but there's just something about being a Virgo that bugs me.

For me it's the whole "Virgo the Virgin" thing that grates. Oh, please. And does every description have to say perfectionist seventeen times?

The concept of the virgo the Virgin is that a Virgo is pure in heart and soul, has nothing to do with being untouched. Being a perfectionist can mean being analytical about everything you do which just means you can use your brain in all aspects and can be an advantage in life when you read about being a virgo or any sign try to read the underlying layers and match every bit to your daily life sure you will notice bits of how you do just what it says just not wanting to admit you do because we're trained with one concept our whole life so it comes difficult for us to adjust to changing our concepts or opinions

But doesn't everyone want to be named after a song from Hair?

On a serious note, does this apply to everyone or just the people that have been born after the "shift"?

Well, since this "shift" has been happening for the last 2000 years, it pretty much applies to everyone.

I believe that we should remain the sign of the star we were BORN under. This new zodiac pattern should only apply to the newborn or those not yet born. I shall remain a capricorn :) I would hate to think that in my 35 years I have lived the lie of believing that I was a Capricorn.

I am on the date of Ophiuchus/ Sag cusp and that makes me still Sag and unique...I love it!

Haven't you heard this doesn't apply to western horoscopes seeing as how we follow the tropical zodiac system? Google it y'all.

Im a Taurean! I have a taurean trait! I'll remain a Taurean!

This is the so called sidereal zodiac, which actually has been known for thousands of years in India. The Sun may cross the Ophiuchus constellation but astrology has always been divided in twelve parts, or twelve houses. Many of you don't realize that the sun sign does not say much about the personality, it's the Ascendant or the Rising sign which describes you more, the sun sign explain what factors in life makes you happy, not your attitude! // Gemini rising, Cancer sun

So I go from being an alpha male aries to sensitive pisces even though I have no traits of pisces? I think I'm going to stick with my sign I was born under.

If applying sidereal zodiac then your sun sign (in Pisces) suggest that you are interested in arts, music and dreaming depending on which house your sun is placed in. So you have probably IMAGINED (Pisces trait) strongly that your sun is fiery. But hey, your rising is perhaps in fire (Aries, Leo or Sag.) which makes you feel macho.

OR MAYBE, just maybe, the zodiac signs don't mean jack all and it's just for 40 year old women in a midlife crisis, looking for "guidance" from tarot cards and star signs. Maybe.

They DO mean something! But if you're talking about this retarded thing, I agree.

so this means it changed for everyone?? I thought I heard something about it being only for people born after a certain year but I guess not. Well I'm still a Pisces according to the old and new dates. Yay!!

I have nothing in common with a Libra! No personality similarities nor traits ...
I loved my Scorpio sign! :(

THIS IS GODDAMN STUPID! WE CAN'T CHANGE ARE BIRTHSIGNS JUST LIKE THAT, THEY'VE BEEN WITH US OUR WHOLE LIFE! WE STAY WITH ARE BIRTH SIGNS WHETHER THIS STUPID ARTICLE SAYS IT OR NOT! Also, don't believe anything from the huffington post (sp?) because that place is a joke!

i am a cancer i have a cancer traits but i also think like geminine all things i always planned or do makes me look like geminine..i've known that even before i found out bout this new ophiuchus thing and my moon sign is not geminine if u thought its coz of my moon and my ascendant is scorpio so....maybe mixing both signs will be something.. but above all this things don u y'all know that whatever u blv.......if u blv then thats it..the power and the secret lies in here..by the way i think we don huv to blv everythin we read we have to learn but stay 50% always so we won't say i am not this or that.. i use astrology and there are many things i've known ..when i study astro i am 100% astro girl but when i am done i come out 50% not blivin in it 100% this is not about wrong or right its about how to be sure..r u sure?how?ask ur self.. coz it says like that? coz ur astrologer says that?.. what else is more maybe we will found out other than ophiuchus too who knows....let's benefit but lets not be stupid with playin our minds lets not kill our true self lets not alow things take place in our orginal self.

I have been researching the thirteenth sign. "Ophiuchus" is the sign and the animal totem is a snake...

The zodiac(s) were in due respect - followed with the moon (lunar cal.) hence thirteen moon per year approx. 28 days. Your dates are not calculating correctly. Please, look at the dates and revise and more truthful of your information - shouldn't there be correct info or look more creditable? For Example: Not a related subject but it was a point. Reading an article in growing tomatoes in the rainforest. The author lived in Colorado, no farming experience, nor have been near any rainforest in their life...

When we learn if the culture - the if(s) and the when (s) the change of the sign per moon happened via full moon or new moon we will have the correct sign locations being that different cultures - counting in a different system. The Catholic Church changed and adopted

from the pagans for conversions of people. Research is needed prior to having the correct moon phase (full or new), correct positioning of zodiac. The bible is full of changes too - changing with each generation to control people. For Example: Caesar Augustus in 425 A.C.E. removed reincarnation from the bible to control people... Thank about it!

I think this Kunkle guy is talking a bunch of garbage. I think he is just trying to make some money and make a name for himself by saying he discover this new zodiac sign or whatever. An astronomer cant be the one to change this. I would think you should be an astrologist, a real one. You cant just go and change the dates of the signs, without changing their definitions.

I am a libra, and the first time I read the definition, it fit me to a T. My new sign according to this guy is Virgo, I read the definition, a couple things match, but it is not me. Some may falsely beleive that their new zodiac sign will match their personality, are you sure? I have read the definition of all the signs, I have at least one trait from each of them, but none fit me as well as Libra, I may wish that my personality fit the traits of others, but they dont. Those of you who say your personality match your new sign, it doesnt, you wish it did.

Well I hope the astrology world doesnt chage this, cause I already have a Libra tatoo, and working on drawing up a new tattoo which will be bad ass, and will be getting my kids zodiac signs tattoo on me.

Oh and bennito, I read a little here and there about astrology, so it is not just for crazy middle aged woman in their 40s. I knew a kid in highschool who could look at you, know nothing about you a guess your sign and your specific personality., kinda creepy in a way, but it got him girlfreinds. Bam, you have been schooled.

Analogy:Just like when europeans believed that the earth was flat it took many years to prove otherwise,many people lost their lives if they believed opposite to the populace.It takes a brave soul to swim up stream,instead of swimming down stream with the populace.

what a load of bullcrap. I'm still a Libra as I was born a Libra in 1993 under the original starsigns. Stop trying to cause controversy NASA......

Don't like the new calendar, don't take it the 13 zodiac sign is fake, people just made that up. I'm libra, and I'm not changing myself to virgo